The Vital Role of Fathering

based in San Clemente, Ca.

JOIN THE JOURNEY by submitting pictures and a recounting of a significant adventure or celebration within your RMDK community! 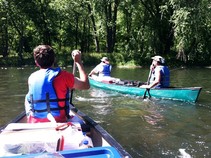 As boys grow they have influences from all around society trying to shape their thinking on what a man should be like. Dan E and Dan W decided to take their boys on a three day, two night canoe trip in an effort to help them understand what a Christian man should be like. Dan and Dan, both agree that the societal pressures to define a man from a secular point of view are strong and that as fathers they have a Biblical mandate to shape their understanding of manhood from a Christian perspective. They also know that unless their boys are taken out of the high-tech world it would be hard for them to stay focused for an extended period of time.

The journey began one night in Spring 2013 after their Wednesday night Men’s Study at their church in Belle Vernon, Pennsylvania. The group had been going through Dennis Rainey's book Steppin’ Up. The dads got talking about how important it is for them to intentionally train their sons to understand what it means to be an authentic man of God. They bantered around some ideas and decided to take a canoe trip on the Allegheny River beginning at the Kinzua Dam and camp on the public islands on the river. Dan E has two sons, Isaiah (16) and Joel (15) and Dan Ws sons are David (18) and Andrew (15).

To prepare for the trip Dan and Dan met a few times to pray and talk about the logistics of the trip such as food, gear, safety, travel plans and more importantly what they would teach their sons. They agreed that their devotional time would focus around the four characteristics of Christian manhood and that each of them would lead two of the discussions. The characteristics, developed by Dennis Rainey, include:

The twenty-four mile trip began on a Thursday afternoon. Once the three canoes were loaded and put in the river the group decided to travel for a few hours, find an island and make camp. The first island, just four miles down the river, contained no sites in which others had already cleared, and the next island was over eight miles away. Isaiah and David decided they were up for the challenge and decided to bushwhack the waist high weeds and make a campsite. Within a couple hours the tents were up, fire blazing, and it was getting dark. The devotional time began with an explanation about what they thought defined manhood and included answers such as getting married, finishing college, shaving…

The dads shared how important it was for them to help their sons grasp a Biblical view of manhood so they discussed their theme verse “When I was a child, I spoke like a child, I thought like a child, I reasoned like a child. When I became a man, I gave up childish ways.” I Corinthians 13:11. Then Dan W. gave an overview of the four Biblical characteristics and then shared specifically about what it means to reject passivity. Throughout each of the devotional times the dads compared and contrasted Peter, David, Adam, and Christ.

After a good, but cold, night sleep and a hot bacon and eggs breakfast they loaded the canoes and began the trip, which needed to be at least 12 to 13 miles. During the trip they fished, relaxed, talked, and saw bald eagles, blue herons, various ducks, and other wildlife. The next stop was on an island that had been inhabited with campers recently so the preparation was a bit easier. We set up camp, ate, and the boys decided to catch crawfish in the river. Our next two devotional times focused on accepting responsibility and leading courageously. Dan E led that discussion and again used Peter, David, Adam, and Christ as contrasting examples. Even though we were interrupted by a raccoon a couple times the message was received very well.

The next morning we awoke to a river that was giving off an early morning fog. After we ate, we set off for the last seven miles. We stopped at our pick-up location early and Dan W. was able to share the importance of seeking God’s reward rather than what the world has to offer. Finally, throughout each of the devotional times we reinforced the need to walk according to the Spirit rather than by our own power. We continually emphasized that they cannot grow to become an authentic man by doing these four characteristics in their own power; that will lead only to frustration and failure.

If you would like more information regarding this experience,

feel free to contact Dan E. at: engstrom at calu.edu 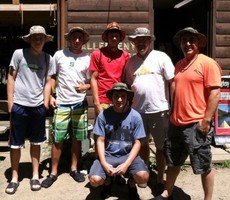